The Fourth Man in the Fire – Perfect Love Cast Out Fear 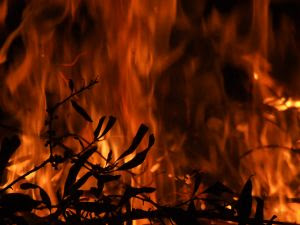 Daniel 3 – Be willing to face your fire (it allergies, fear, Agoraphobia – how about lust such as addictions of the flesh). When we face our fears or giants and willing to walk through the fire, you find victory.

Don’t allow fear to rule your life. Learn to develop more fear of the Lord. Fear means sculpturally = reverence and willing to obey Him over any cost like Shadrach, Meshach, and Abednego. They had more fear of the Lord than over Nebuchadnezzar. They knew the scriptures of who to serve even when they were in bondage in a strange land where God was not known. Fear = Sin and the opposite of fear = Faith.

Faith in the Fire

It takes faith in the Lord to walk you through areas that have power over you. If you are hit with fear, do what 2 Corinthians 10:5 says to do.  Cast it down and remember to press into the Father’s Love. Perfect love cast out fear.  We can have faith in the fire called uncontrollable circumstances which produce fear.

Going through the fire = sanctification! This means dying to self, dying to your flesh and dying to the control the enemy.  That means you step out of darkness into the Holy Spirit.  Fear comes from satan and Faith comes from the Lord.  To activate faith is trusting in the Lord.

“For if ye live after the flesh, ye shall die: but if ye through the Spirit do mortify the deeds of the body, ye shall live. For as many as are led by the Spirit of God, they are the sons of God.” Romans 8:13-14

Dying to self is a never-ending process. I have to continually ask God to show me what needs to be removed in my life. I want to be used by Him. In order to be used I need to offer my body as a living sacrifice. It has to be acceptable to Him. I’ve had to come face to face with the fact that I must decrease so He can increase. I am learning how to deal with the fact that my feelings and my wants are not the most important things if I am to be used by God.

Isn’t it time to take away the power from the enemy and have power in Christ?  When Jesus died on the cross, he went to hell and took the keys away from Satan.  Those keys represent authority and Jesus gave us authority over sin through the Holy Spirit.  We have a choice.  We have a choice over fear, bitterness, sadness, hatred, insecurity, etc.  We can do all things through Christ.

1. Nebuchadnezzar the king made an image of gold, whose height was threescore cubits, and the breadth thereof six cubits: he set it up in the plain of Dura, in the province of Babylon.

4 Then an herald cried aloud, To you it is commanded, O people, nations, and languages,

5 That at what time ye hear the sound of the cornet, flute, harp, sackbut, psaltery, dulcimer, and all kinds of musick, ye fall down and worship the golden image that Nebuchadnezzar the king hath set up:

6 And whoso falleth not down and worshippeth shall the same hour be cast into the midst of a burning fiery furnace.

7 Therefore at that time, when all the people heard the sound of the cornet, flute, harp, sackbut, psaltery, and all kinds of musick, all the people, the nations, and the languages, fell down and worshipped the golden image that Nebuchadnezzar the king had set up.

8 Wherefore at that time certain Chaldeans came near, and accused the Jews.

9 They spake and said to the king Nebuchadnezzar, O king, live for ever.

10 Thou, O king, hast made a decree, that every man that shall hear the sound of the cornet, flute, harp, sackbut, psaltery, and dulcimer, and all kinds of musick, shall fall down and worship the golden image:

11 And whoso falleth not down and worshippeth, that he should be cast into the midst of a burning fiery furnace.

12 There are certain Jews whom thou hast set over the affairs of the province of Babylon, Shadrach, Meshach, and Abednego; these men, O king, have not regarded thee: they serve not thy gods, nor worship the golden image which thou hast set up.

13 Then Nebuchadnezzar in his rage and fury commanded to bring Shadrach, Meshach, and Abednego. Then they brought these men before the king.

14 Nebuchadnezzar spake and said unto them, Is it true, O Shadrach, Meshach, and Abednego, do not ye serve my gods, nor worship the golden image which I have set up?

15 Now if ye be ready that at what time ye hear the sound of the cornet, flute, harp, sackbut, psaltery, and dulcimer, and all kinds of musick, ye fall down and worship the image which I have made; well: but if ye worship not, ye shall be cast the same hour into the midst of a burning fiery furnace; and who is that God that shall deliver you out of my hands?

16 Shadrach, Meshach, and Abednego, answered and said to the king, O Nebuchadnezzar, we are not careful to answer thee in this matter.

17 If it be so, our God whom we serve is able to deliver us from the burning fiery furnace, and he will deliver us out of thine hand, O king.

18 But if not, be it known unto thee, O king, that we will not serve thy gods, nor worship the golden image which thou hast set up.

19 Then was Nebuchadnezzar full of fury, and the form of his visage was changed against Shadrach, Meshach, and Abednego: therefore he spake, and commanded that they should heat the furnace one seven times more than it was wont to be heated.

20 And he commanded the most mighty men that were in his army to bind Shadrach, Meshach, and Abednego, and to cast them into the burning fiery furnace.

21 Then these men were bound in their coats, their hosen, and their hats, and their other garments, and were cast into the midst of the burning fiery furnace.

22 Therefore because the king’s commandment was urgent, and the furnace exceeding hot, the flames of the fire slew those men that took up Shadrach, Meshach, and Abednego.

23 And these three men, Shadrach, Meshach, and Abednego, fell down bound into the midst of the burning fiery furnace.

The Fourth Man in the Fire

24 Then Nebuchadnezzar the king was astonished, and rose up in haste, and spake, and said unto his counsellors, Did not we cast three men bound into the midst of the fire? They answered and said unto the king, True, O king.

The Son of God

25 He answered and said, Lo, I see four men loose, walking in the midst of the fire, and they have no hurt; and the form of the fourth is like the Son of God.

27 And the princes, governors, and captains, and the king’s counsellors, being gathered together, saw these men, upon whose bodies the fire had no power, nor was an hair of their head singed, neither were their coats changed, nor the smell of fire had passed on them.

28 Then Nebuchadnezzar spake, and said, Blessed be the God of Shadrach, Meshach, and Abednego, who hath sent his angel, and delivered his servants that trusted in him, and have changed the king’s word, and yielded their bodies, that they might not serve nor worship any god, except their own God.

29 Therefore I make a decree, That every people, nation, and language, which speak any thing amiss against the God of Shadrach, Meshach, and Abednego, shall be cut in pieces, and their houses shall be made a dunghill: because there is no other God that can deliver after this sort.

30 Then the king promoted Shadrach, Meshach, and Abednego, in the province of Babylon.

Those thoughts of fear are fiery darts and we can put out those fiery darts that the enemy throws at us through the word of the Lord.  There is power in God’s word but you need to have a revelation of who you really are, who God really is and what exactly did Jesus do on the cross for us.  We heard about it, read it but is it in your heart in a deeper revelation of what exactly what he did for us?  We have to daily choose life.  Above all taking the shield of faith wherewith ye shall be able to quench all the fiery darts of the wicked. –Ephesians 6.16

By Traci Morin
Touch of God Healing Ministries (a healing and deliverance ministry located in Dallas, Texas – why don’t you join us at Set Free Bible Study to start your journey of healing?)

Fourth Man in the Fire a Story about Daniel
Fruit of the Spirit
Like Minded People
The Power to Overcome Your Past
Spiritual Discernment
Power of Your Words
What is Sanctification?
What is on your mind?
Unrealistic expectations in Relationships

If you are not saved and want to be saved, please visit this site:

How Do I Find Jesus?

This entry was posted in Articles, Sanctification and tagged deliverance healing, Die to Self, Faith, Faith in the Fire, Fear of the Lord, fiery furnace, Fourth Man in the Fire, Perfect Love Cast Out Fear, sanctification, Sin, The Son of God, There is No Fear in Love, Trusting in the Lord. Bookmark the permalink.

This site uses Akismet to reduce spam. Learn how your comment data is processed.